It's been nearly two months since the November elections, and while the hot topic was the commander-in-chief, I'm more excited about what Arizona did.

Sure, 2020 was an insane year, and we all hope to move past it, but a couple of items slipped under the Covid radar that was positive. Prop 207 passes in Arizona, allowing the consumption of marijuana for all adults, and can now start being sold recreationally as of January. Some of the other highlights from the bill:

"Under the measure, adults 21 and older would be allowed to possess up to one ounce of marijuana, according to their website. It prohibits smoking marijuana in public spaces, such as restaurants, sidewalks, and parks, and lets companies decide whether to allow marijuana at work and among (their) employees.

While this was an excellent win for Arizona, another bill was being passed by the house on December 4th. Somehow I missed it, and I wasn't too happy with myself. Still, it seems we are just congressional moments away from having cannabis be legal nationwide with the decriminalization of marijuana thanks to house bill 3884. 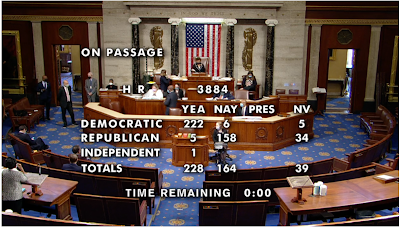 Here are some minor details:

Specifically, it removes marijuana from the list of scheduled substances under the Controlled Substances Act and eliminates criminal penalties for an individual who manufactures, distributes, or possesses marijuana.

The bill also makes other changes, including the following:

With that being said, one state at a time has been a grueling process for the last three decades, but we are inching ever closer to finally winning this battle.